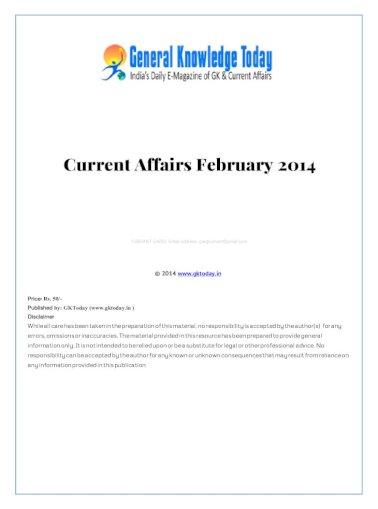 I am putting a very best book for current affairs for february: 2014. The book consist of all important current affairs- national, International and sports in short, precise and best way. Download current affairs February: 2014 e-book for free. This book is made keeping in mind, the needs of SSB aspirants. Increase your General Awareness for SSB Interview and If you are preparing for general competition- SSC, Banking, Civil services, UPSC, NDA, CDS,IBPS, DELHI/UP POLICE then this book will help you alot.

Libya has completely destroyed the chemical arsenal it inherited from MoamerKadhafi, 10 years after the now slain dictator signed the

Arseniy Yatsenyuk Elected As Ukrain Interim PM
The Ukrainian parliament has on 27 February elected former opposition leaderArseniy Yatsenyuk as the country’s Interim Prime Minister.He was backed by 371of 417 participating deputies in the Parliament.

India and China Held 17th Round Of Border Talks
India and China held their 17th round of border talks on 10 – 11 February 2014.Special representatives – National Security Adviser Shivshankar Menon andChinese State Councillor and top diplomat Yang Jiechi – met in New Delhi on 10February and 11 February for talks on the boundary question.The talks betweenboth sides have crossed the first stage – on agreeing to settlement of theboundary question. The second stage talks – on the framework for resolution ofthe boundary question – has been continuing for the past eight years.

CCEA approved Green India Mission
The National Mission for Green India has received approval from the CabinetCommittee on Economic Affairs (CCEA) on 20 February as a Centrally-sponsoredscheme.The project, which has a planned investment of about Rs.13,000 croreduring the 12th Plan Period.

Parliament Passed Whistleblower ProtectionBill
Whistleblower Protection Bill was passed by Parliament on 21 February.The billaims to provide a regular mechanism to encourage persons to discloseinformation on corruption or willful misuse of power by public servants andministers.The bill was passed by Lok Sabha in 2011 and was taken up by theUpper House in 2012 for consideration.

India’s First Monorail Service Inaugurated InMumbai
India’s first monorail service was inaugurated by the Maharashtra ChiefMinister Prithviraj chavan on 1 February in Mumbai.The monorail service thatwill link the city to major stations will begin its first phase of 8.93 kmbetween Wadala and Chembur in the eastern fringes of the Commercial Capital.

Odisha Lokayukta Bill 2014 Passed In Assembly
Odisha Legislative Assembly on 14 February passed the Odisha Lokayukta Bill2014, with provision of keeping Chief Minister, ex-Chief Ministers, otherministers and public servants under the purview of a six-member anti-corruptionpanel. The Bill has provisions similar to that of the Central Act which waspassed in Parliament in December, 2013.

Chhattisgarh Government To Set Up A LawCommission
Raman Singh, the Chief Minister of Chhattisgarh on 25 February announced that anew Law Commission will be set-up in the state to suggest changes in laws asper the geographical and social requirements of the state. This announcementwas made in the state Assembly.

Sachin Tendulkar and CNR Rao Received BharatRatna
Renowned scientist C.N.R. Rao and former cricketer Sachin Tendulkar were on 4February conferred the Bharat Ratna, the highest civilian award of the countryfor exceptional contribution in any field of human endeavour.The award waspresented by President Pranab Mukherjee at a brief ceremony in the historicDurbar Hall of Rashtrapati Bhavan.

Joshna Chinappa Won Winnipeg Open Title
India’s Squash player Joshna Chinappa won the Winnipeg Winter Club Open trophyon 3 February. She defeated Heba El Torky of Egypt in the final.The triumph ofChinappa marked the second consecutive year of an Indian winning the trophywith Dipika Pallikal being the first to clinch it before her in 2013.

Rajasthan Bans FDI in Multi-brand Retail
Rajasthan on 1 February cancelled its approval for the foreign directinvestment in multi-brand retailing.The approval was given earlier by theprevious Congress state government led by former Chief Minister, AshokGehlot.With this decision of cancelling the approval over FDI made Rajasthanthe second state after Delhi to withdraw approval for FDI in multi-brandretail.

Tata Group India’s Most Valuable Brand
According to the list released on 18 February of world’s 500 most valued brand,Brand Finance Global 500 , Tata group was declared India’s most valuable brandwith a value of US$ 21.1 billion, while US-based technology giant Apple hasretained its top position globally with about US$ 105 billion.Apple is followedby Samsung (US$ 79 billion) at second place globally.Tata has retained its topplace among Indian brands and its global ranking has also improved from 39th in2013 to 34th now.

BrahMos Missile Successfully Test Fired InSalvo Mode
The 290km-range BrahMos supersonic cruise missile was successfully fired on 6February from a naval warship INS Trikand in salvo mode in the Arabian Sea.Forthe first time, the BrahMos cruise missile was fired in salvo mode off theRussian-built warship off the coast of Karnataka with an interval of threeseconds off the coast of Goa.

Australian Astronomers Discovered Oldest KnownStar In Universe
A team of scientists at the Australian National University has on 11 Februarydiscovered the oldest known star in the Universe.The star known as  SMSSJ031300.36-670839.3, is in the Milky Way galaxy and some 6000 light years fromthe Earth. The star was formed shortly after the Big Bang 13.7 billion yearsago.The star was discovered using the ANU SkyMapper telescope at the SidingSpring Observatory.

India Successfully Test Fired ‘ Akash ‘Missile
India on 26 February successfully test-fired its Akash medium-rangesurface-to-air missile from a defence base in Odisha, for the third time. Akashwas earlier successfully tested from the same defence base on 21st and 24thFebruary 2014. The indigenously-developed missile, with a 27-km range and aneffective ceiling of 15 km, was test-fired from the Integrated Test Range ofChandipur in the coastal district of Balasore, 230 km from Bhubaneswar.

R.K.Tiwari Appointed as new Chairman of CBDT
R.K.Tiwari has been appointed as the as the new chairman of Central Board ofDirect Taxes (CBDT) on 9 February.He will succeed Chairperson Sudha Sharma whois scheduled to retire on 28 February 2014.Tiwari is a 1976-batch IndianRevenue Service (IRS) officer. He is currently working as the Member ofLegislation and Computerisation Department in the CBDT.

BCSBI —— Banking Codes and Standards Board of India

CBDT —— Central Board of Direct Taxes

Penguin Decided To withdraw a Book entitled ‘The Hindus: An Alternative History ‘
Penguin India, the publisher of book entitled ” The Hindus: An AlternativeHistory  ” on 11 February agreed to withdraw the book from the Indianmarket. This book is written by Wendy Doniger, an American Scholar andIndologist. The decision was made by the publisher following a legal wrangleagainst it.The decision was made between the publisher and Delhi basedcomplainant organisation called Shiksha Bachao Andolan, who moved to courtalleging distortion aimed at denigrating Hindu traditions. The organisation hasfound that the book is insulting Hindus.

Bimal Jalan Committee On Bank Licences SubmitsRecommendations To RBI
The Bimal Jalan committee which is scrutinising applications for new banklicences submitted its report to the Reserve Bank of India (RBI) on 25February.The committee led by former Reserve Bank of India (RBI) Governor DrJalan held its third and final meeting before submitting its recommendations tothe central bank.

National Science Day Observed Across India On28 February
India on 28 February 2014 observed National Science Day to mark the discoveryof the Raman Effect by Indian physicist Chandrasekhara Venkata Raman (CVRaman).In 2014, the theme of the day is Fostering Scientific Temper and Energy conservation.This day is celebrated every year on this day to spread a message about thesignificance of scientific applications in the daily life of the people.TheNational Council for Science and Technology Communication (NCSTC) in 1986 askedthe Government of India to designate 28 February as National Day. Guys i have uploaded many PPDT or TAT images earlier for practice, the key point to get success in screening test or in TAT is to Practice more and more Selecting candidates for various appointments purely on the basis of written test of testimonials is a thing of the past. Whether it is selection for a job, or for training Hello everyone, this is an Sample PPDT practice set on group of girls going to Seminar . This is a part of PPDT Practice set , which may come across